AWI is dedicated to bringing  the guests you want to see! Keep reading for details on this year’s guests. Do you have a suggestion for a guest? We want to hear it! Please post it in our forums section here!

TODD HABERKORN
Todd Haberkorn is currently a proud member of the Anime community and continues to be its humble servant by way of English dubbing and will be coming to you as the official Master of Ceremonies for your AnimeWorld experience. Haberkorn works primarily in Texas and Los Angeles as an actor, director, producer, and writer.  As far as shows go, catch Todd’s voice as lead roles in Sgt. Frog as Keroro, Hetalia as Italy, Hikaru in Ouran High School Host Club, Suzuka as Yamato, Ghost Hunt as Naru, Holic as Wataknuki, D. Gray Man as Allen Walker, Sands of Destruction as Kyrie, Soul Eater as Death the Kid, and some others he can’t say right now. Todd’s most recent anime role is the lead role of Natsu, the fire eating, fire wielding wizard from Fairy Tail. Check out most of the shows listed above on Hulu.com, funimation.com, and NETFLIX!! And not illegally please Be sure to check out TeamHaberkorn.com for ways to join this “korntastic” fan club! A portion of the proceeds goes to supporting the Acadiana Humane Society, a non-profit, no kill animal shelter in Louisiana. When not in the booth, Todd is a producer with his company, Out of the Office Productions. Todd is represented by The Horne Agency and William Morris Endeavor.

ALEXIS TIPTON
Alexis Tipton has been a Voice Actor for FUNimation Entertainment since late 2008. She has been in over 40 titles and has voiced roles such as Julia Chrichton in Full Metal Alchemist: The Star of Milos, Yomi Isayama in Ga-Rei: Zero, Musubi in Sekirei, Sun Seto in My Bride is a Mermaid, Moka Akashiya inRosario+Vampire, Yuki Saegusa in Dance in the Vampire Bund, Mizuki Himeji in Baka and Test, and many more both announced and unannounced. Alexis has also provided vocals for character songs and a few of FUNimation’s trailers. On top of voice work, Alexis has been an active cosplayer for the past eight years and has been featured in a handful of magazines as well as the book Cosplay in America.

ROBERT AXELROD
Robert Axelrod has carved a career in show business that runs the gamut.  Born and raised in New York City, he did commercials and theater as a child and teen, eventually ending up in the Soho Avant-garde Theater scene in a show called “Little Trips”, then Off-Broadway in a play called “The Destroyers”.  Axelrod left acting for the world of music.  He spent eight years as a working rock musician playing electric bass and singing in folk, rock, and soul bands.  Music brought him to Los Angeles where he decided to return to acting, a decision he never regrets. He is the voice of Lord Zedd and Finster on the “Mighty Morphin Power Rangers”.  The Lord Zedd voice is one of the most recognizable character voices around.  He voiced Armadillomon and Wizardmon on “Digimon, Microchip, The Punisher’s sidekick, on “Spiderman”, Rico on “Robotech”,  and has voiced countless Anime features including “Akira”, “The Big O”, “Cowboy Bebop”, “Brain Scratch”, et al.  As Lord Zedd, he starred in both the first Power Rangers feature film and the wildly popular live show that toured the country.  He was a regular character on Saban Entertainment’s “Wowser” series (as Ratso Catso), “Journey To The Heart of the World” (as Scarface), “Hallo Spencer” (as Elmer), and more.  He just finished narrating the mockumentary “Safety First: The Rise of Women and voicing four Anime series, “Gaiking”, “Danguard Ace”, “Captain Horlock”, “The Adventures of Nadja”, and “Fist of the North Star”. 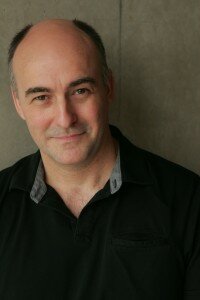 Kent Williams is a Texas-born, Dallas actor. He’s logged 22 years of classroom instruction introducing K-12 students to such fine arts disciplines as marionette puppetry, stage stuntwork and Japanese kabuki theater and is finishing out a 3-year project with the U.S. Dept. of Education and Dallas ISD. A Telly Award-winning puppeteer, Kent is Executive Director of Le Theatre de Marionette and pulls strings alongside fellow FUNimaniac Todd Haberkorn. On stage Kent is a company member of the critically acclaimed Undermain Theatre, best known for it’s basement performing space and premiering of brave new works. An SMU theater grad, Kent is a go-to fine arts instructor for Big Thought and Junior Players and has been teaching in the ghettos, barrios, exclusive parochial academies and prisons for over two decades and can boast that both Travis Willingham and Maxey Whitehead were former students as preteens!

Kent continues to enjoy the conveyor belt of character-voicing opportunities at FUNimation. A particular favorite is Hatori Sohma from Fruits Basket, also a dragon. Other various series that Kent has contributed his voice to include Fullmetal Alchemist, Dragonball Z, Dragonball GT, Trigun, One Piece, Yu Yu Hakusho and Trinity Blood.

Christopher Smith is in the middle of a very busy year. In gaming it can be summed up in one word – Skyrim. Chris is the voice of the evil Daedric Lord, Molag Bal in 2011′s Game of the Year. He’s also heard every Thursday on NickToons as Bren, and Jon Ace in the American anime series Monsuno. Chris has also had roles in anime such as Captain Bright Noa for Gundam: Unicorn, the latest in the Gundam franchise. He’s also the voice of Major Peter Soyuz in Full Metal Alchemist: Sacred Star of Milos, and Lucius Isaac for the Marvel anime adaption of Blade. He’s Kinnosuke in DuRaRaRa, Matoko Kibune, Rose, and Wonderweiss in Bleach, Headmaster Kaien Cross in Vampire Knight, Kittan in Gurren Lagann, Ishidate and Shuura in Naruto, and The Puppeteer in Ghost in the Shell. He’s upwards of 25 characters apiece in Code Geass, Monster, and Redline. Hanamoto-Sensei in Honey and Clover, The Mikado in Moribito, Abe in Ghost Slayer Ayashi, and featured prominently in Twelve Kingdoms, Overman King Gainer, Tenjho Tenghe, Gundam Force, Samurai Champloo, and a few dozen more. He’s also multiple roles in the upcoming big-screen remake of the 70′s hit Gatcahman (G-Force/Battle of the Planets).

In games, he’s Rufus in Street Fighter 4 (Super SF, & SFXTekken), Superman in Mortal Kombat vs DC, and Emperor Mateus in Final Fantasy: Dissidia, and Dissidia: Duodecim, Agent Smith in Matrix: Path of Neo, and Professor X and Odin for Marvel Pinball Games. He was Tenebrae in Tales of Symphonia 2, Commander Cadigan in Dead Space, and Supreme Commander Gaghan in Star Ocean 4. He’s Fandrel Staghelm, Mal Ganis, and Razslo Crushcog (plus a dozen others) in World of Warcraft, Nobunaga Oda in the Samurai Warriors franchise, Sun Wu Kong in Warriors Orochi, and Yuan Shao in Dynasty Warriors. Scalpel and Firehawk in Command and Conquer 4, and he voice-matched Hugh Jackman, Hugo Weaving, and Anthony LaPaglia for Happy Feet. He’s major bad guy Juda in the newest Fist of the Northstar, and Sgt “Gunny” Garrity in the upcoming reboot of Steel Battalion. He’s multiple characters in Vandal Hearts 2, Ratchet and Clank, God of War, Atlantica Online, Lunia, Skycrawlers, Xenosaga, and about 100 other games.

Don Hyun K presents … The motion behind the video games…

Don Hyun K
Don Hyun K is a gold medalist for the USA Chinese Martial Arts Team (World Games 2008).  He is one of the few foreigners in the world to train in seclusion at the Shaolin Temple.  His work with the Shaolin Monks landed him a spot as one of Donnie Yen’s elite K-Stars for martial arts stunt work in Hong Kong cinema.  His martial arts abilities have also lead him to do work for Warner Brothers as a motion capture artist  for The Mortal Kombat video game.

Chii Sakurabi is a J-POP singer from Tokyo, Japan. She has performed live throughout Tokyo for over three years and recently moved to the United States where she is expanding her music career internationally. Chii and composer Nucky have written original songs with a fantasy world concept. Chii released her first album, “Mirage,” in November 2011. This album has both high-energy and ambient styles, including some songs with English and Japanese versions. With Chii’s amazing voice and adorable dances, you can’t help but fall entranced into her world! Chii’s current ambition is to share Japanese fairytales through music. Enjoy her fantasy world! Visit Chii online at www.chiisakurabi.com and on Facebook at www.facebook.com/ChiiSakurabi

Eien Strife is a high energy “adventure rock” act that brings to life the story of Terina, a dense forest world that is unknowingly facing its extinction. The four characters of the story- Cheydra, Raien, Lyren and Kale will join together and perform a concert that is a truly unique experience both musically and visually. They have been traveling all over the country setting out on new adventures  and making new friends while putting on a show that is full of excitement and surprises. The members of Eien Strife are planning to share their story and delivering a performance that the audience at Anime World Indianapolis will not forget.

Schedule information pertaining to Eien Strife such as panels at AnimeWorld Indianapolis will be posted soon. Please stay tuned for more information regarding panels, concerts, new guest announcements and more for the 2012 convention season. Be sure to check out their website!: https://www.eien-strife.com/

SAMURAI DAN
The husband and wife team of Daniel and Jillian Coglan are full-time martial art instructors, specializing in 16th century Samurai arts.  When not teaching at their dojo, the Kojokan, they travel the United States performing and teaching the ancient ways of the most famous warriors in history. With a combined 35 years of experience, their show is a unique blend of history, combative skill, and humor, designed to educate and entertain audiences both large and small. Beyond their martial skills, the dynamic duo collaborated to write, direct, host, and star in a 12 episode TV series entitled, “The Way of The Samurai.” Daniel is also an author, with several martial art articles published, and is currently working on his second full-length novel.

Costuming has been a key part of fandom since the 1930s, and it’s one of the most unique and personal things you can do at a convention. It’s all about using yourself as an artistic medium – and, of course, it’s great fun!

“…And Sewing Is Half the Battle!”   is a cosplay group based in the Midwest. In addition to their successful competitive career, “…And Sewing Is Half The Battle!” presents dozens of instructional seminars and hands-on workshops for costumers of all levels each year. Whether you’re just curious about costuming or an experienced cosplayer, you’re sure to learn something new from these cosplay panels (as well as be entertained by amusing tales of cosplay kludges and inventive ways to use trash)!